Home » Blog » Philly Fed chief: Recession not in the cards

Philly Fed chief: Recession not in the cards Philly Fed chief: Recession not in the cards

NEWARK – The chief executive of the Federal Reserve Bank of Philadelphia said Wednesday that he is not predicting a recession this year, despite rampant public concerns about lingering high inflation and rising interest rates.

Patrick Harker, speaking at the Lyons Companies and University of Delaware Economic Forecast on the university’s STAR Campus, the first in-person return for the annual event in three years, also said that he believed the Fed was looking at several additional benchmark interest rate increases this year.

He believes those increases are likely to be only 25-basis-point increases though rather than the more aggressive 75-point increases that the Fed approved several times in the last year to push the rate to a range of 4.25% to 4.5%.

“The labor markets are simply too hot to indicate a significant downturn at this point,” said Harker, who previously served as president of UD before moving to oversee the region’s Fed bank and currently serves as a voting member of the all-important Federal Open Market Committee that sets the benchmark interest rate.

To reach that point, however, the Fed is making money more expensive to borrow, ranging from corporate debt to mortgages and auto loans.

“We’re seeing unmistakable signs of a slowdown in the most interest-rate sensitive parts of the economy, like housing,” Harker said.

Despite those rising fiscal constraints, the nation continues to see strong consumer spending and a booming labor market, which is convincing Harker that the Fed is threading the needle on slowing the economy without a recession. The Philly chief said he expects the nation’s gross domestic product to grow by 1% this year before climbing back to its trend growth line of 2% in 2024 and 2025. 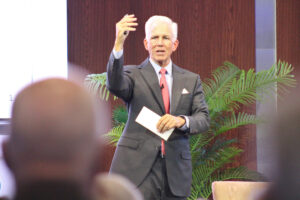 In his own remarks on Wednesday, Michael Farr, founder and CEO of D.C. investment advisory firm Farr, Miller & Washington, disagreed with Harker, saying he believed the signs for a recession were ripe, ranging from yields on Treasury bonds to diminishing household savings and soaring credit card balances to a disconnect between stock values and corporate earnings.

Farr is also increasingly concerned about the far-right faction of House Republicans who could play havoc in discussions over the nation’s debit limit this summer.

“They’ve proven that they have no problem with brinkmanship or the reputational fallouts from the brinkmanship,” he said. “How is the Federal Reserve supposed to keep enough liquidity in the system if a panic occurs?”

Despite those concerns, Farr estimated that any recession would be short-lived, lasting two years or less, because the core foundation of the American economy remained strong. 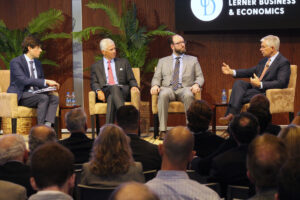 A panel discussion at the Lyons Companies/University of Delaware Economic Summit covered inflation, Wall Street, Congress and more before a crowd of hundreds. | DBT PHOTO BY JACOB OWENS

When asked about the disconnect between stock market investors and Federal Reserve projections, Farr said he wanted his clients to be informed but not trying to be too clever.

“This is to meet your long-term goals. This is not to outsmart the people on CNBC or you brother-in-law who will tell you about his new hot stock tip,” he said. “The big script is working. America is working. Corporate expansion is working. That’s why we invest. We believe that America will grow, and corporate America will continue to flourish, and we’ll let our money grow.”